In the seventies, two researchers from Penn State visited the Sao Paulo, Brazil area and discovered the local natives to be extremely healthy with a very low rate of disease. The longevity rate was disproportionately high with people living well over 100. Their secret? It was a simple mushroom, they told the researchers, the ABM mushroom (Agaricus Blazei Murill).

Subsequent studies over the next 25 years have shown the ABM to stimulate the immune system and promote natural mechanisms to battle infectious disease and cancers. ABM stimulates lymphocyte T-cell and Helper T-cell production. The polysaccharide contained in ABM stimulates production of interferon and interleukin that indirectly function to destroy and prevent the proliferation of cancer cells. Additionally, ABM turned out to be a very powerful antiviral agent preventing viruses from entering tissues.

In Japan, ABM, in an injectable form, was found to eliminate all cancerous tumors in 90% of the experimental mice. Additionally, when the mice were fed ABM as a preventative and then injected with a very powerful cancer causing agent (Sarcoma 180), 99.4% of them showed no tumor growth. Conventional medicine has no preventive this powerful.

The studies in Japan showed ABM to be 80% more effective than the world’s number one cancer drug, PSK. It contains much higher levels of beta glucans than the other medicinal mushrooms (Maitake, Shiitake, and Reishi) and stimulates NK (Natural Killer) cell activity.

It should be noted that the beta-glucans in these mushrooms work best when taken with vitamin C.

The studies in Japan were so successful that today Japan is now buying over 90% of the available ABM from Brazil.

Mushrooms for Health and Longevity by Nutritional Councilor Ken Babel is both informative and essential to anyone looking to reap the medicinal and nutritional benefits of the world of medicinal mushrooms.

In addition to the vitamins and nutritional essence of each mushroom, he provides the medicinal value of each, and it’s application to the various illness’ and diseases we face in our world today.

Through case studies and clinical research, he give us the evidence to walk away with a new consciousness of the world of fungi.

“Today mushrooms are still considered the greatest of all tonics, promoting overall well-being and vibrant health. In natural food and supplement stores, mushrooms are carving out their own niche as dietary supplements apart from herbs and vitamins.”

he says. At the same time he also reminds us with a collection of delicious mushroom recipes and even mushroom desserts, where mushrooms such as Tremella Fuciformis, Shiitake and Enoki are key ingredients, that introducing medicinal mushrooms into our diets, is a great way to balance the body, and promote a healthy immune system.

Mushrooms for Health and Longevity is a book that can actually change your life. The information on the benefits of these medicinal mushrooms is often overlooked in North America and western medicine. Ken Babel has brought to our attention the power medicinal mushrooms can have in our daily lives. 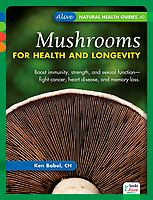 Cheers! To our health and longevity